Post Script: The changeable situation in Jerusalem has led to a change in plans. The Rome to Jerusalem leg of this journey has been changed to the 'End to End' in the UK, after which the journey will resume as above in Vienna.

The Great Glen Way, part one. 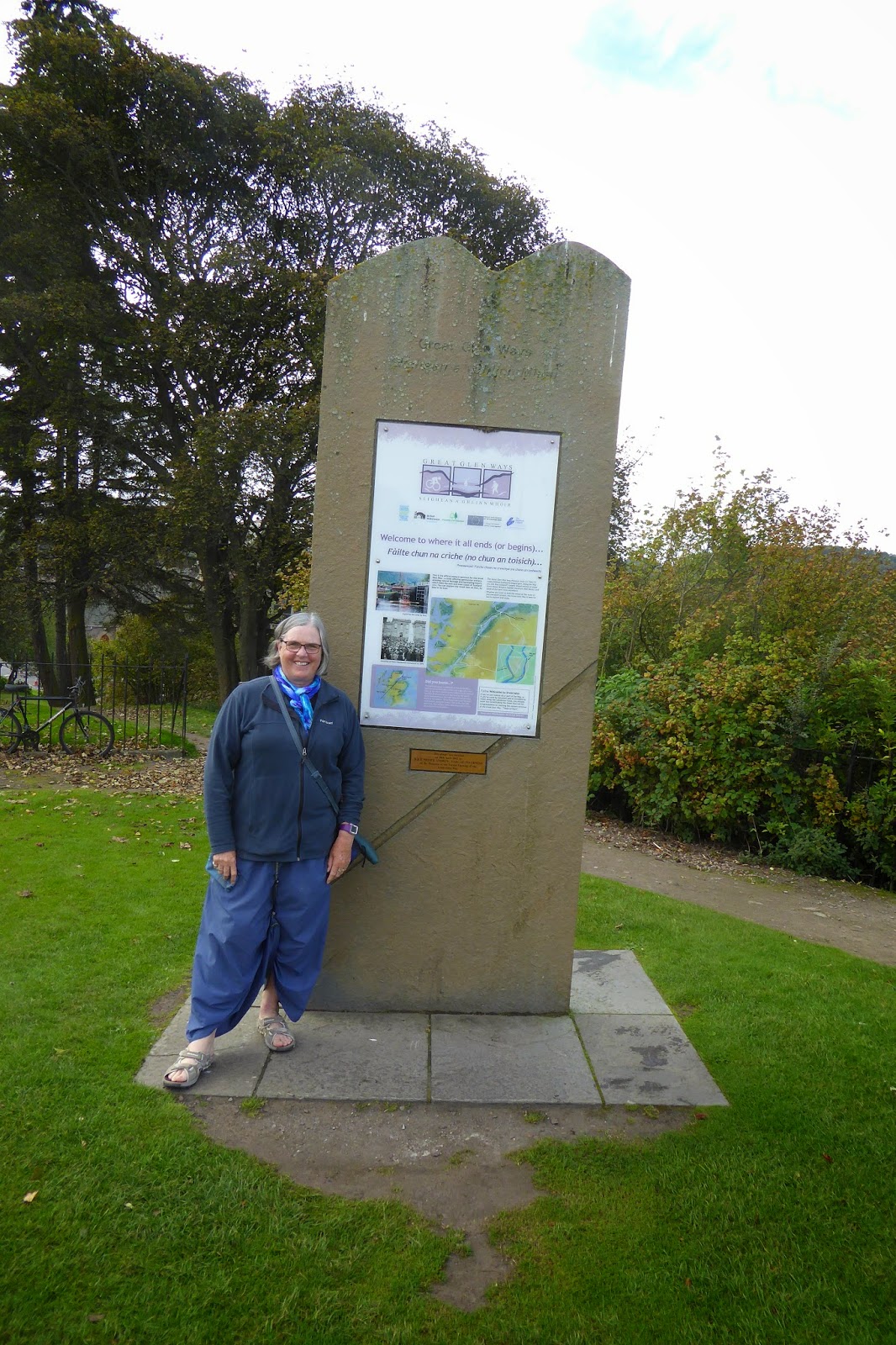 Fortunately I had asked someone to take this photo on Sunday because when I actually set off from the Start / Finish of the Great Glen Way there was no one around at all. 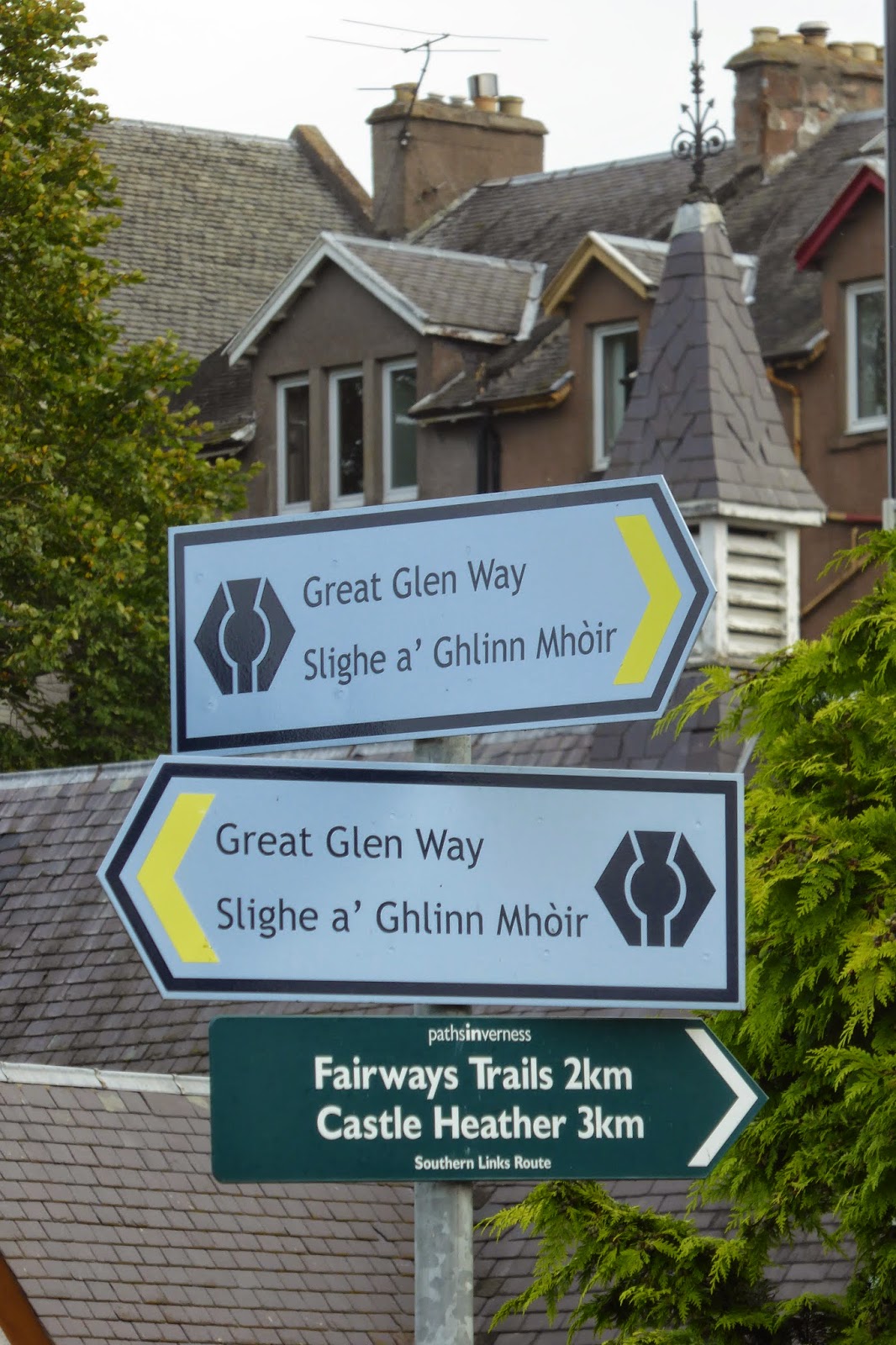 Near the start / finish sign were these signs, two going in opposite directions!  I went right and followed the signs through the islands in the River Ness and up the hill.

Setting off from Inverness on Wednesday the weather looked quite threatening, and indeed I had only gone a couple of kms when I had to put the rain coat on, but it was just a brief shower, and for most of the day I walked rain coat free, though I had to make sure it was anchored right onto my pack as once I got up above the tree line the wind was very strong. 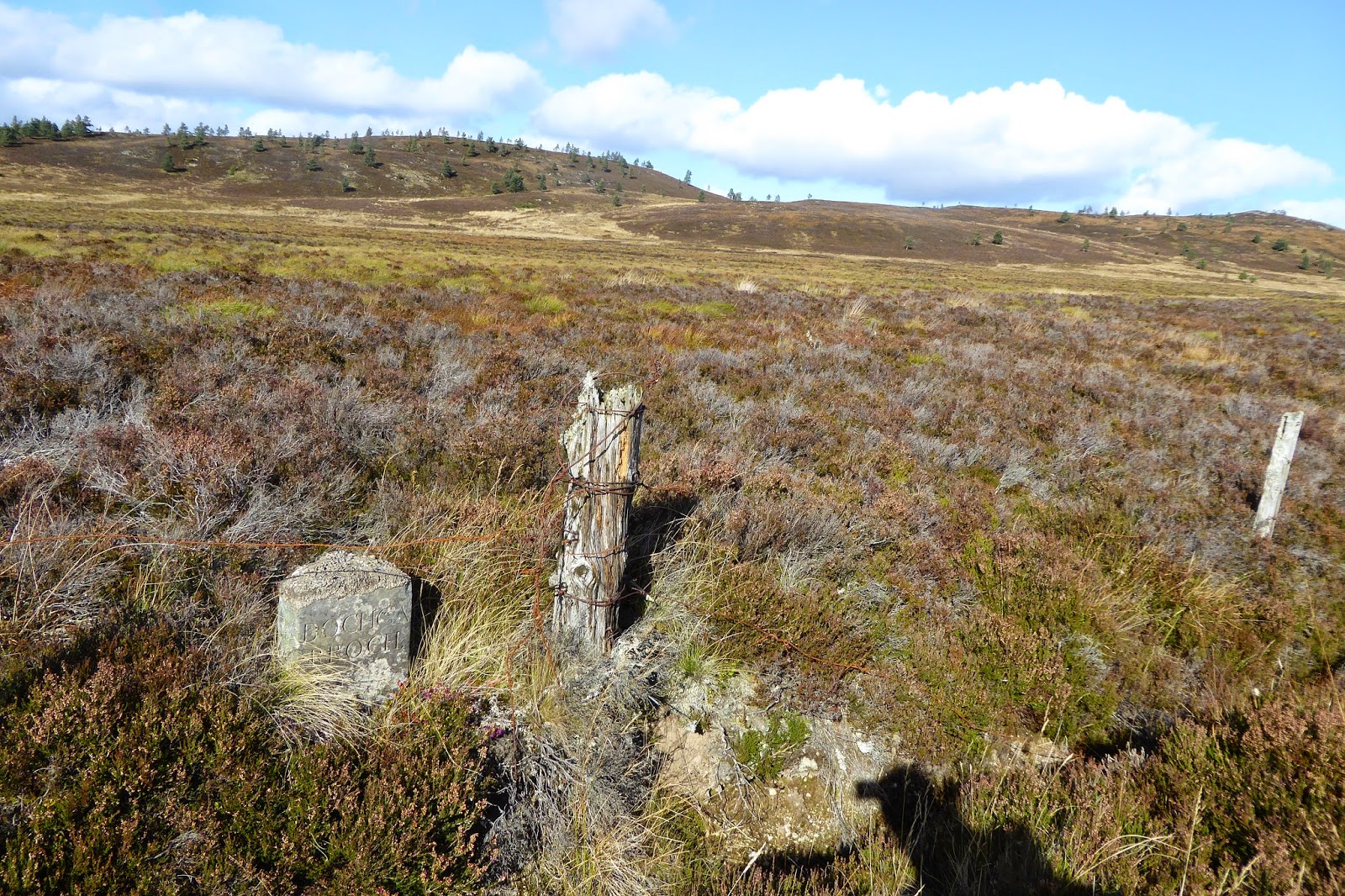 As I walked along the moors, I passed this old the marker post. 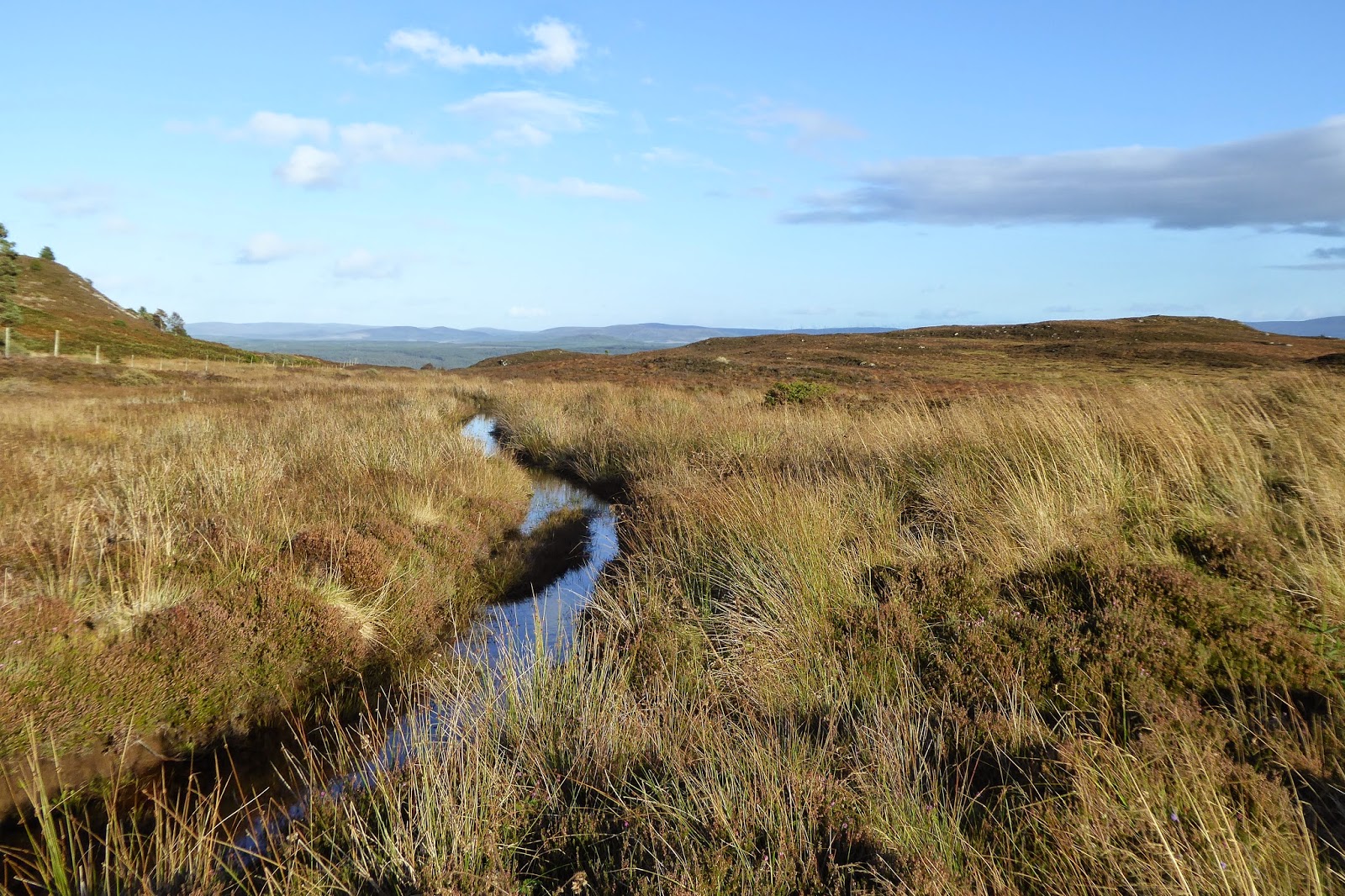 This was very boggy country, nigh on impossible to find a dry campsite even if I wanted to!

The path is very well way marked, with just a momentary confusion occasionally as to which way to go.  The signs are a tasteful blue, making them harder to see than the yellow arrows of the Camino, but it is surprising how quickly ones eye gets accustomed to the more refined  and subtle markers.  One of the great things about this path is the way there are information posts along the path giving relevant information about the area I have been walking through.  The other impressive thing is that, though the only guide books available are from south to north, the markers guide the walker in both directions - from the south and from the north.

When the path goes higher, which it does on a number of occasions, and gets above the tree line the wind has been quite strong. 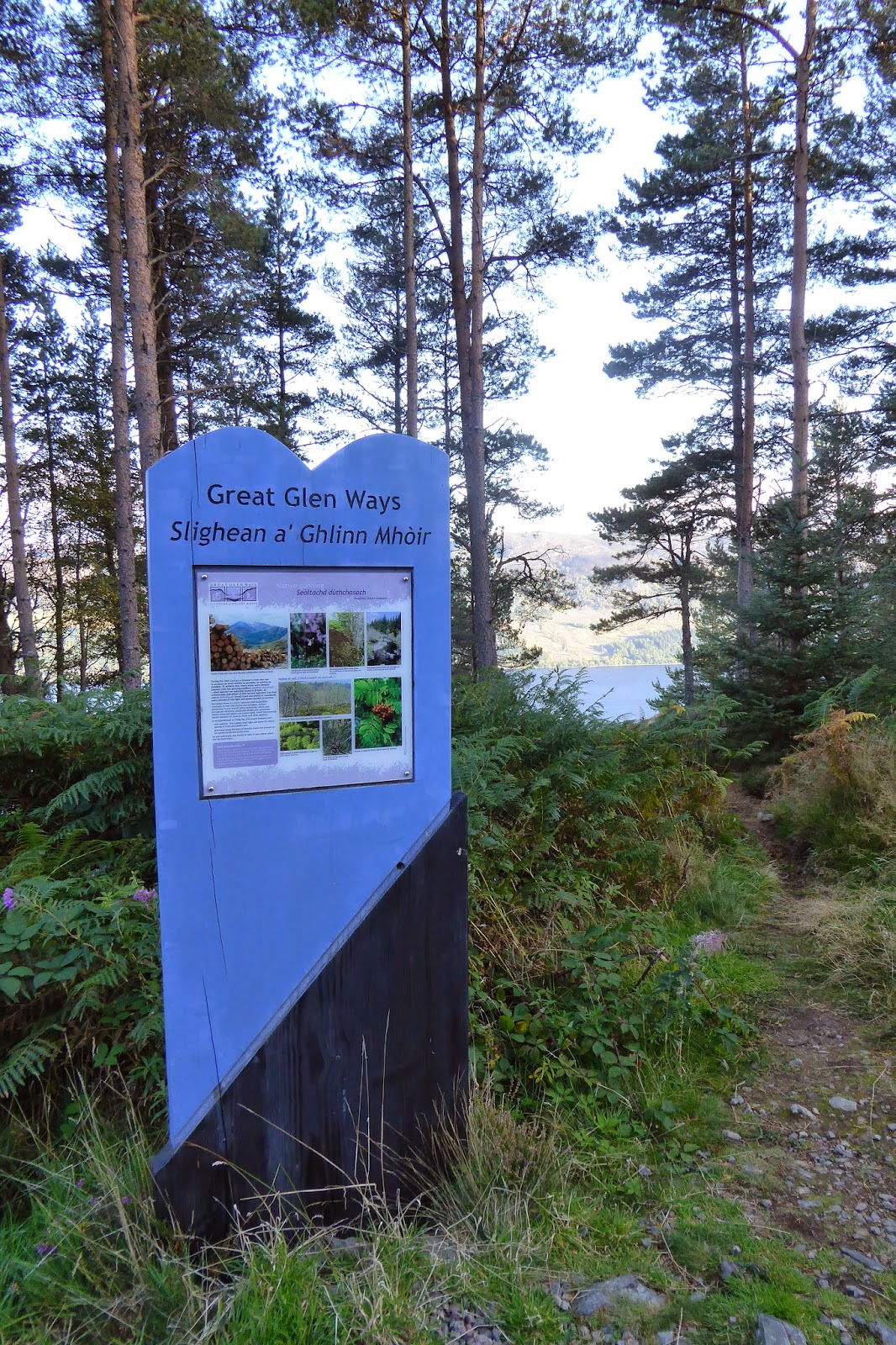 Just one of the information posts I walked past on the way from Inverness, with Loch Ness in the background. 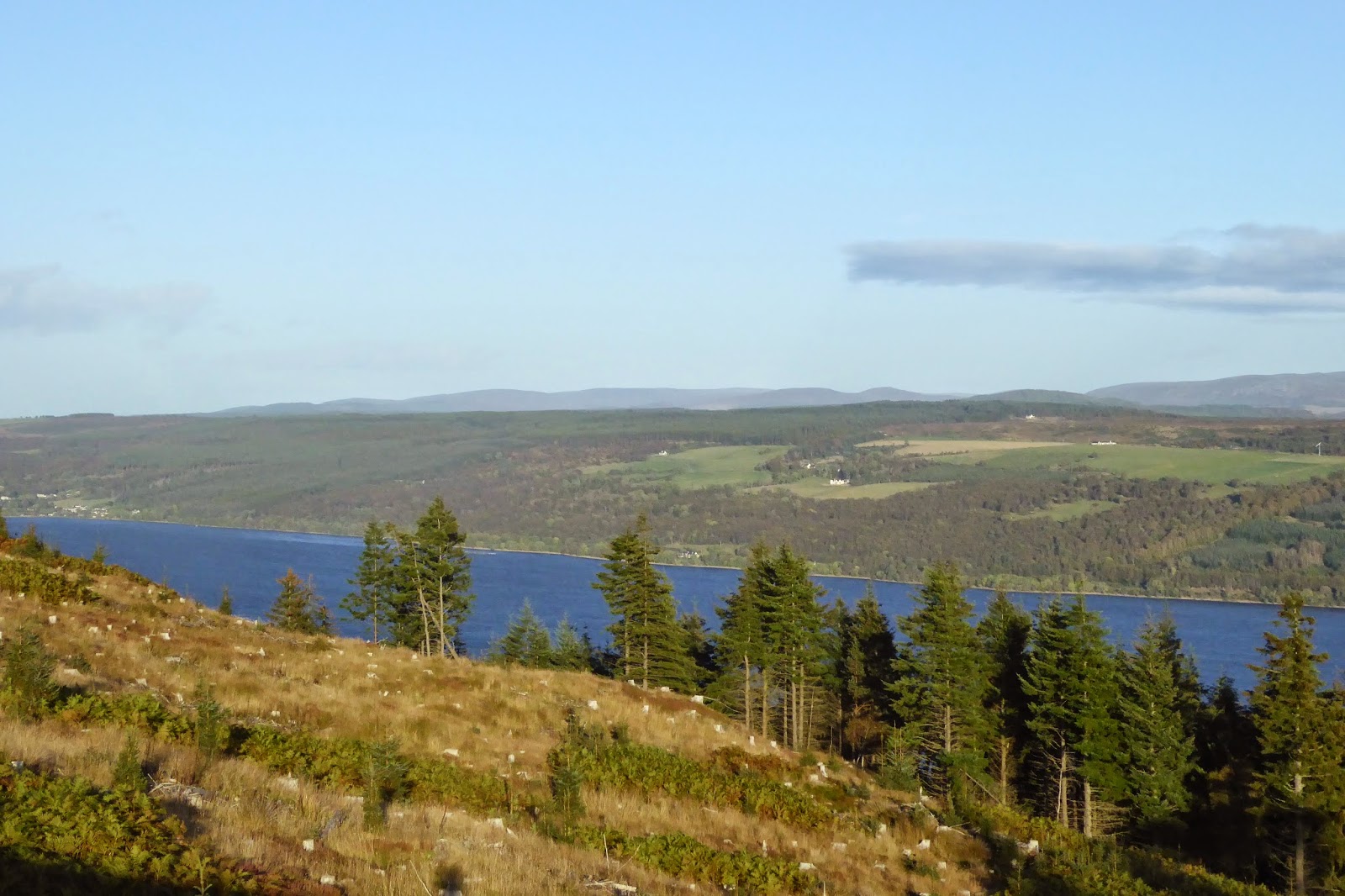 I was headed to Drumnadrochit on this first day, and had my first glimpses of Loch Ness on the way. 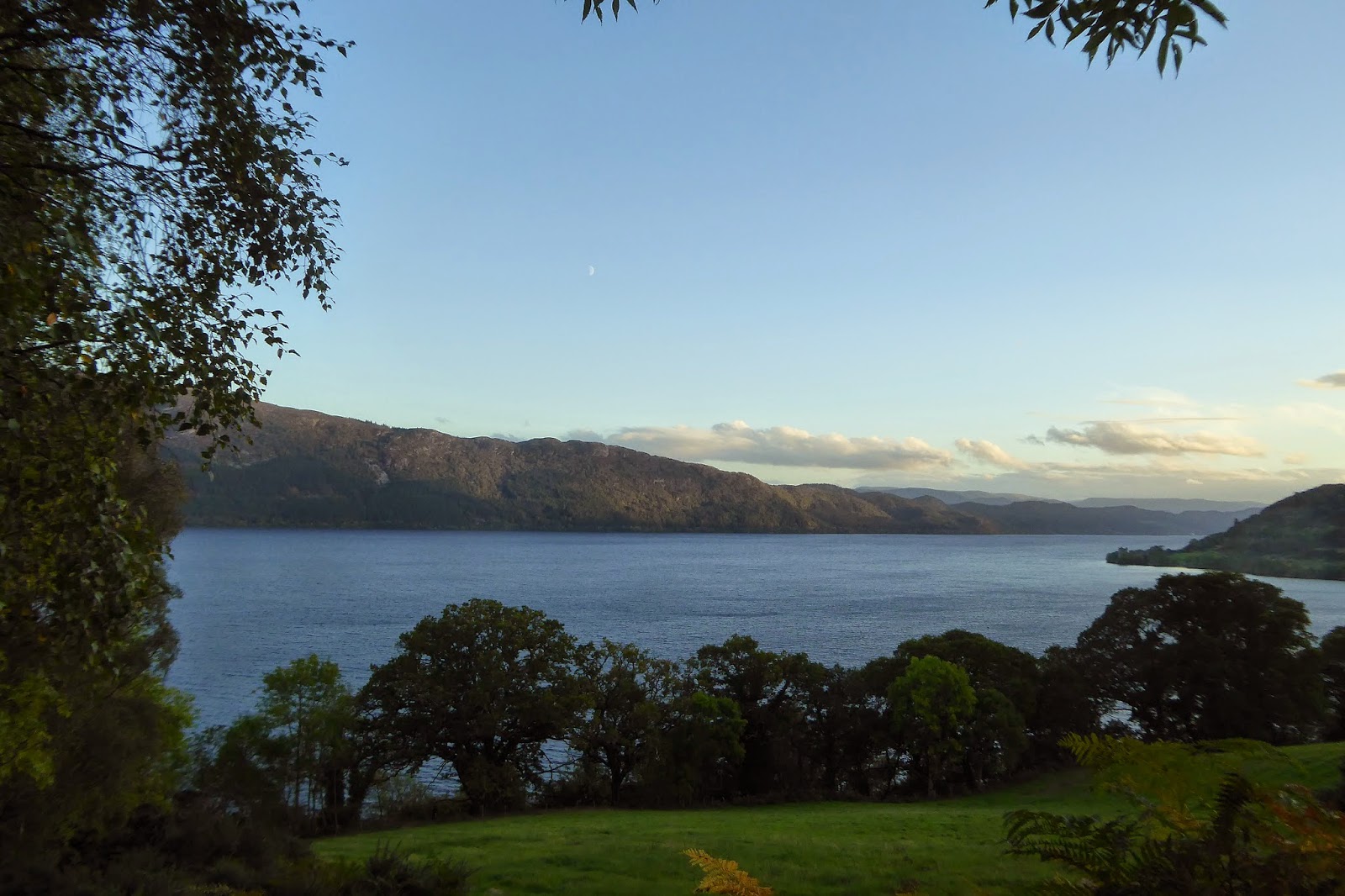 Loch Ness in the gloaming.  If you look carefully at the little promatory on the right you can see the ruins of Urquhart castle.

On the second day of the Great Glen Way, there are two choices to make. One is whether to visit Urquhart Castle, and the other is to choose between the high or the low road.  I visited the castle, and chose the high road.  The forecast was for strong winds and rain later in the afternoon and so I had to move with a fair bit of speed as the winds might have made it dangerous up high, and I had been told to be careful.  They were strong and I was buffeted as I walked up high, but the views were worth it.

These first two days took longer than they should have because I kept meeting people walking the other way and of course I would stop and blather! 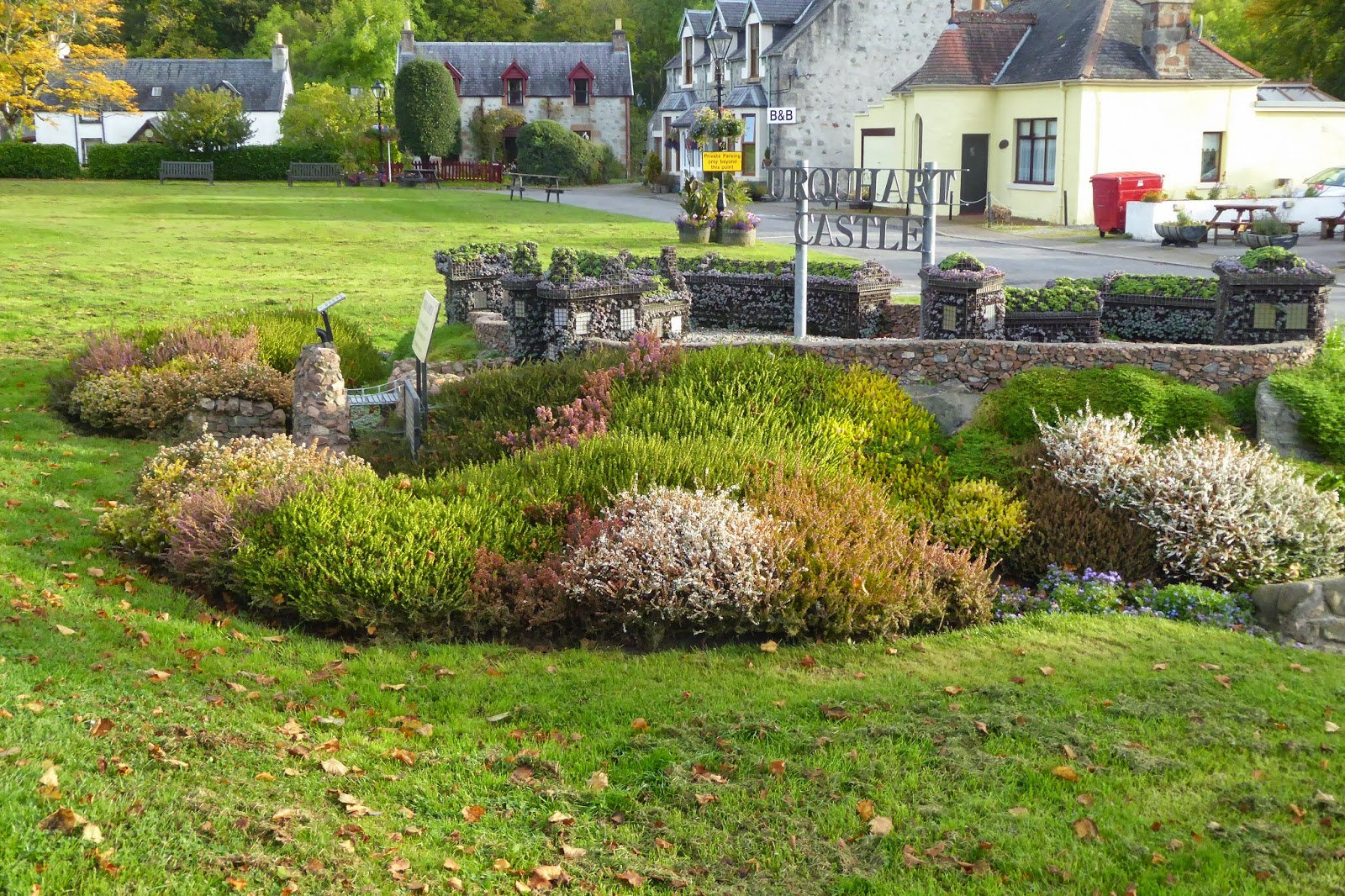 A floral model of Urquhart castle in the square at Drumnadrochit. 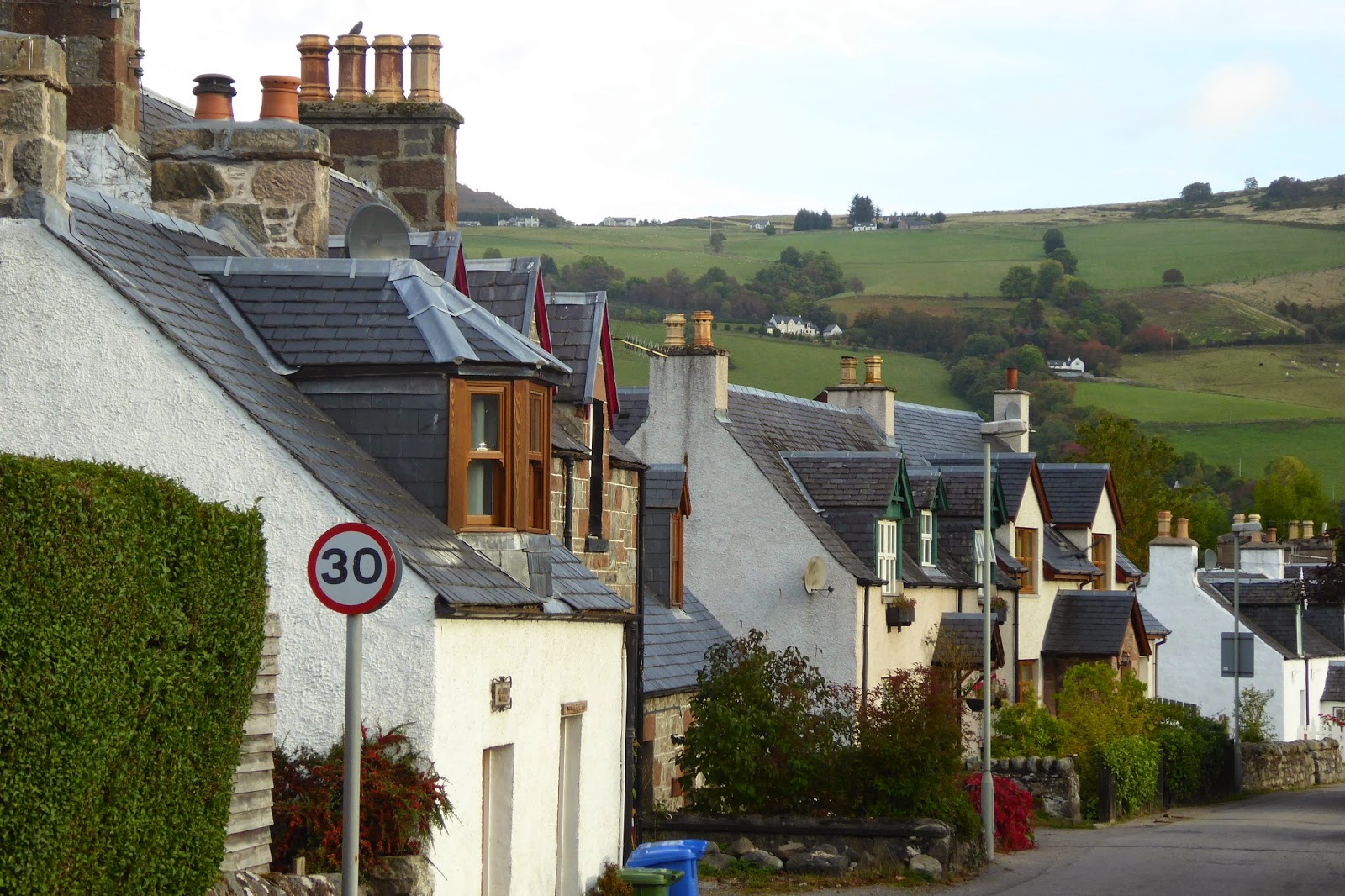 Leaving Drumnadrochit the path heads through the village of Lewiston.  It is here that one can divert and do a tour of  Urquhart Castle. 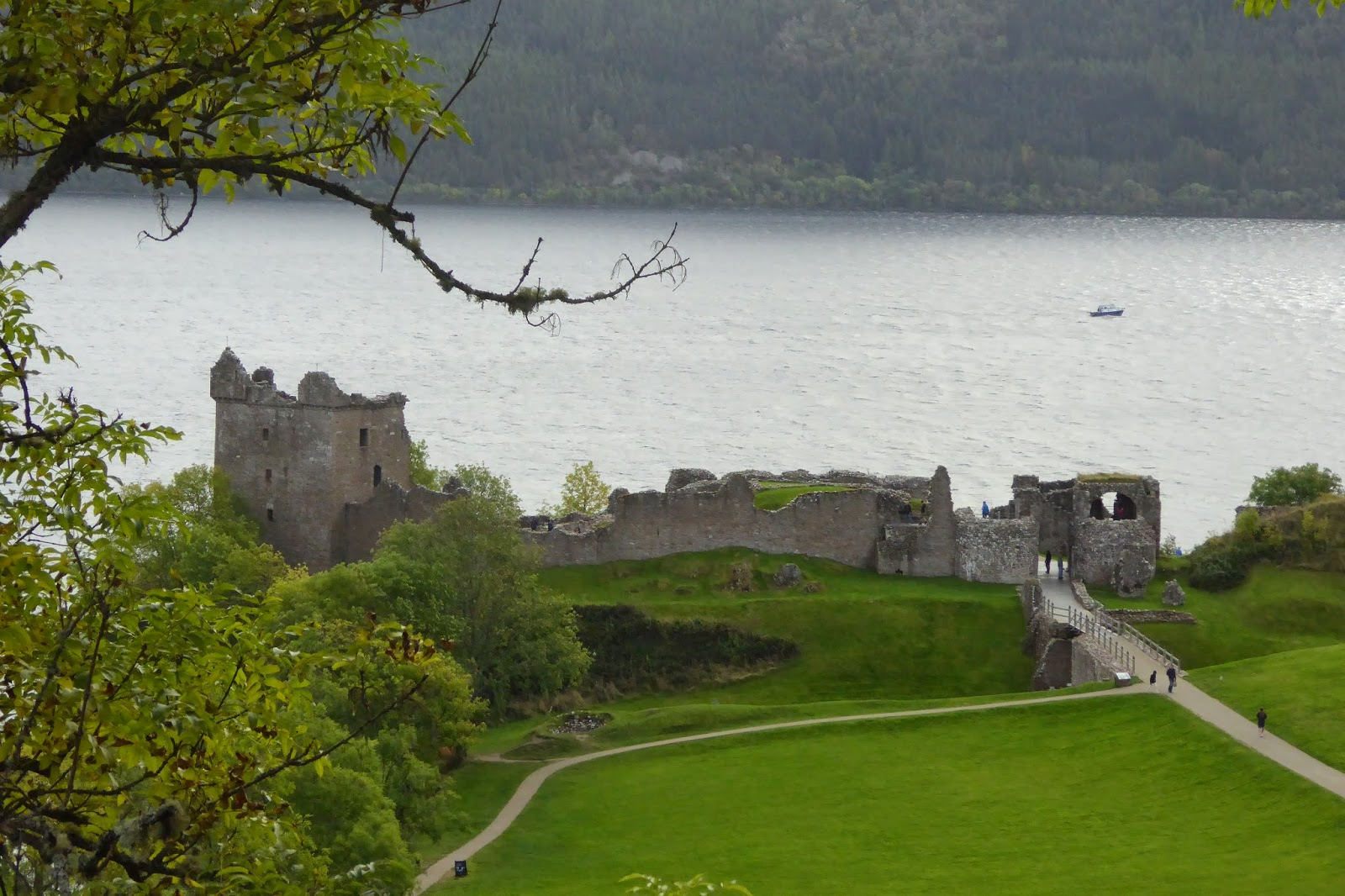 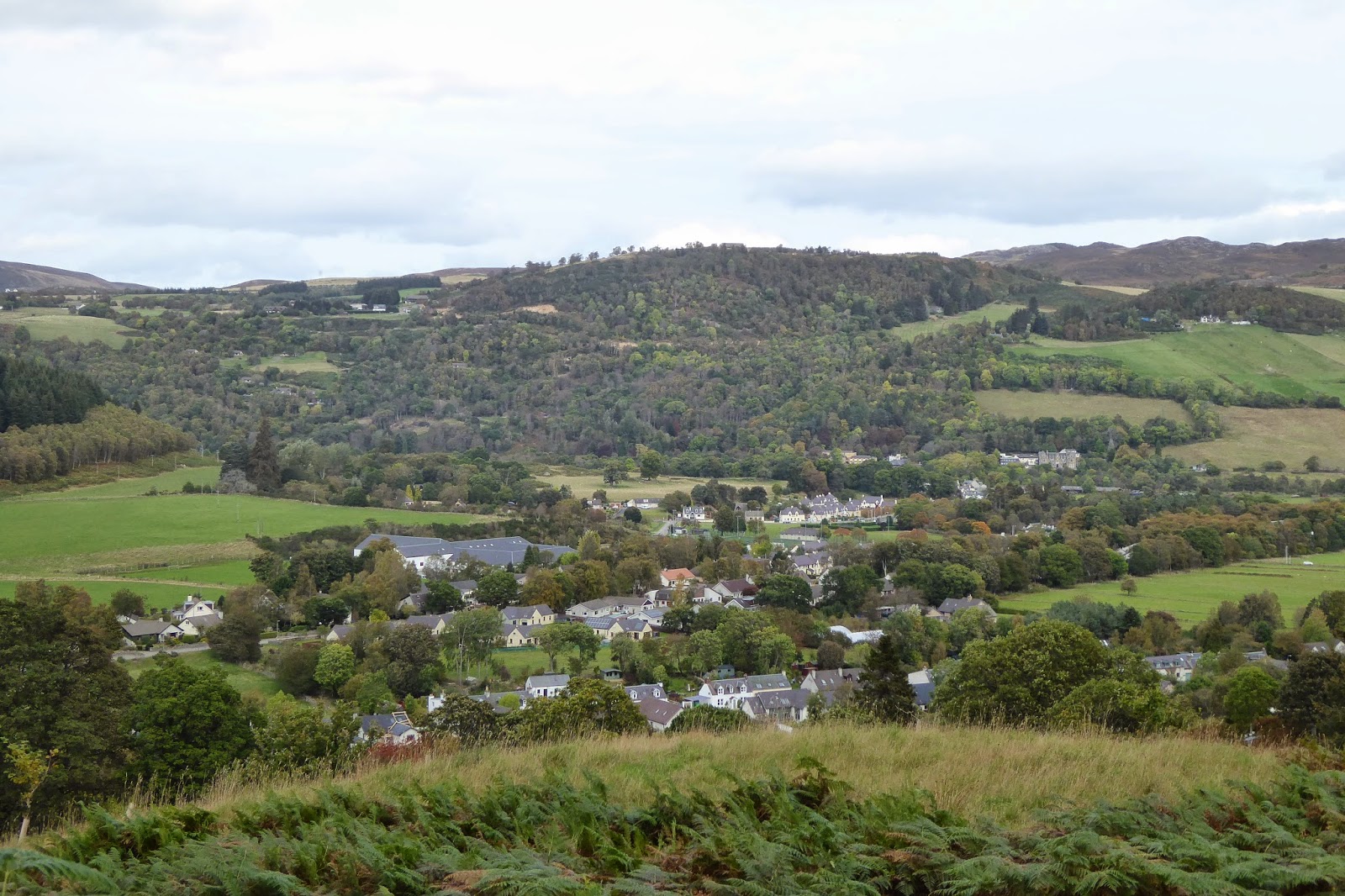 Looking back at Drumnadrochit. 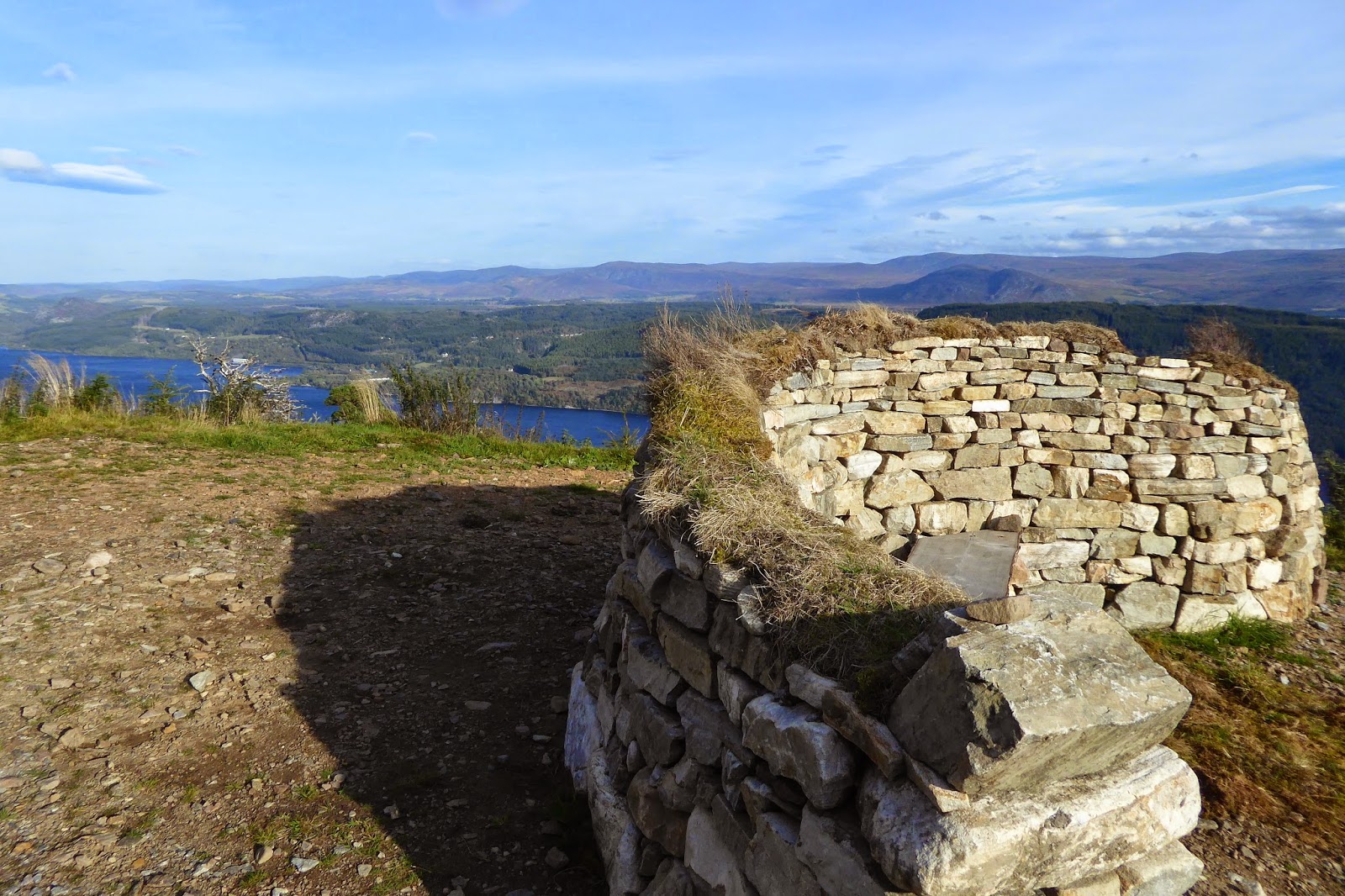 On the high route there were a couple of shelters.  This is an S shaped one and so walkers can get out of the wind and admire the view on one side or the other.  Loch Ness is in the background. 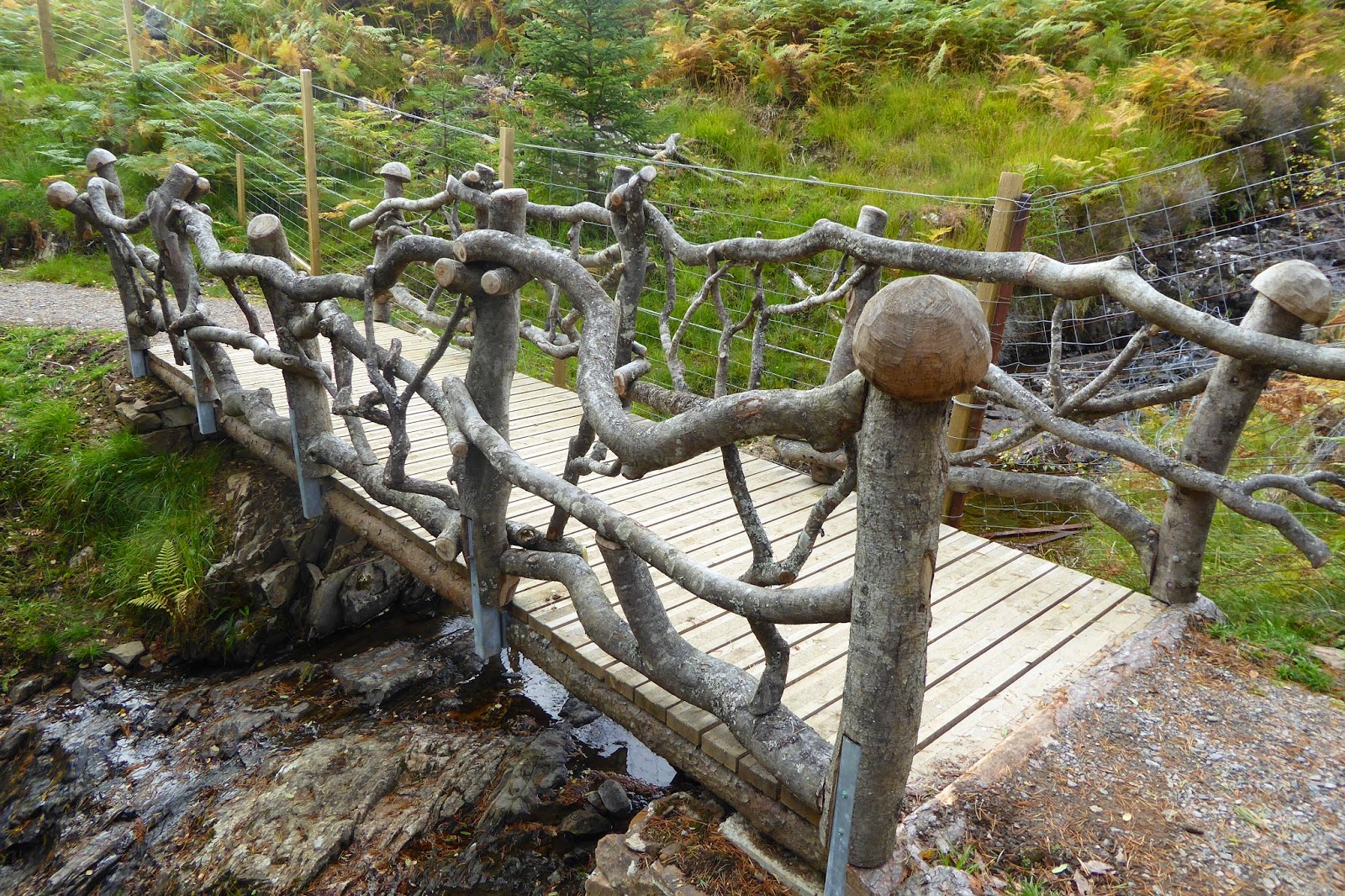 The high route is a purpose built path that takes the walker above the tree line mostly, but here it is dropping down through the forest and someone took time to make this "Trogg Bridge" - quite quaint. 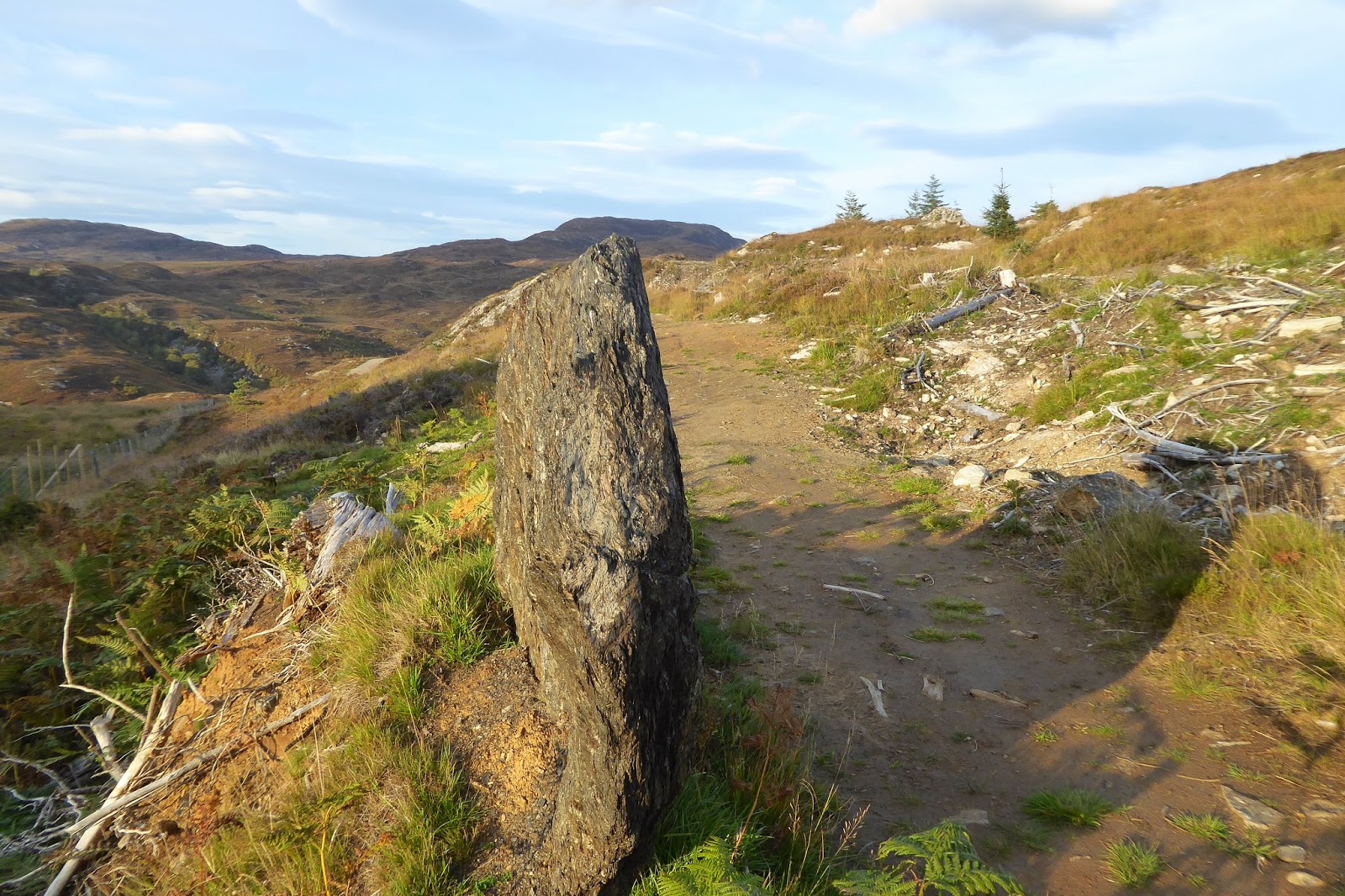 The path continues  downhill towards Invermoriston, passing what, to me, looked like a fossilised tree stump. 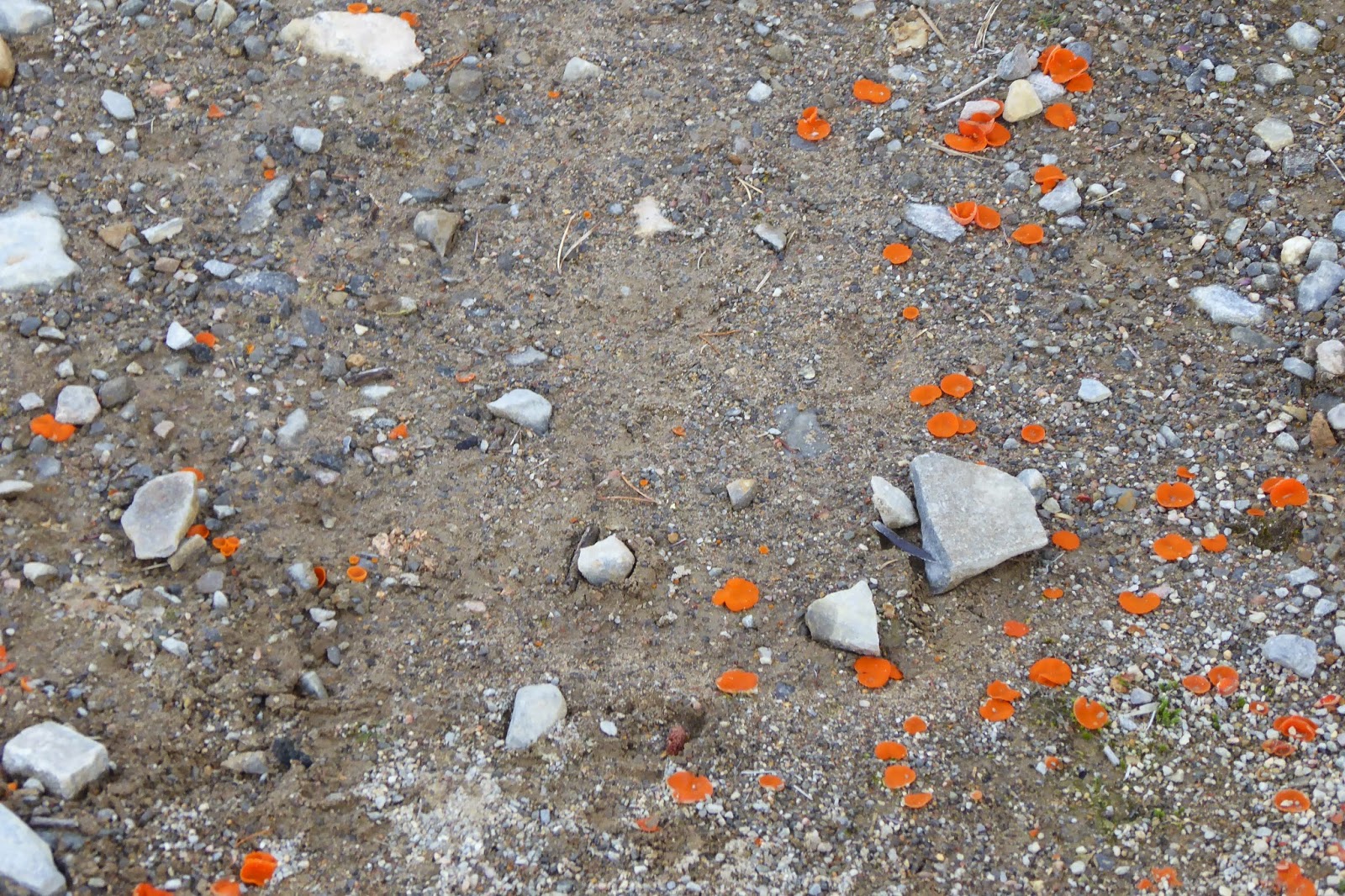 On the new high route path I frequently came across an orange fungus (also below), which looked like someone had dropped orange peel on the ground. 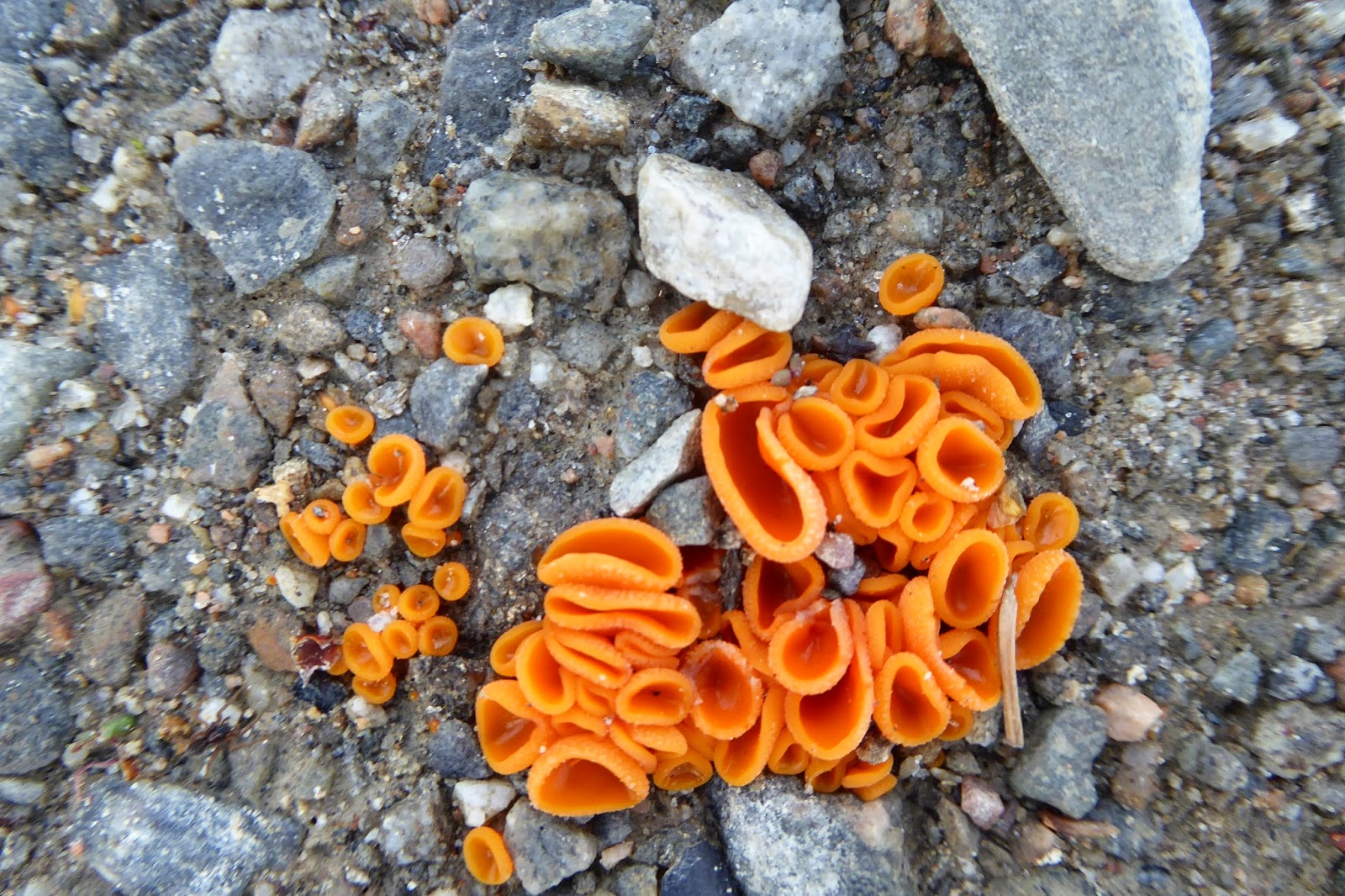 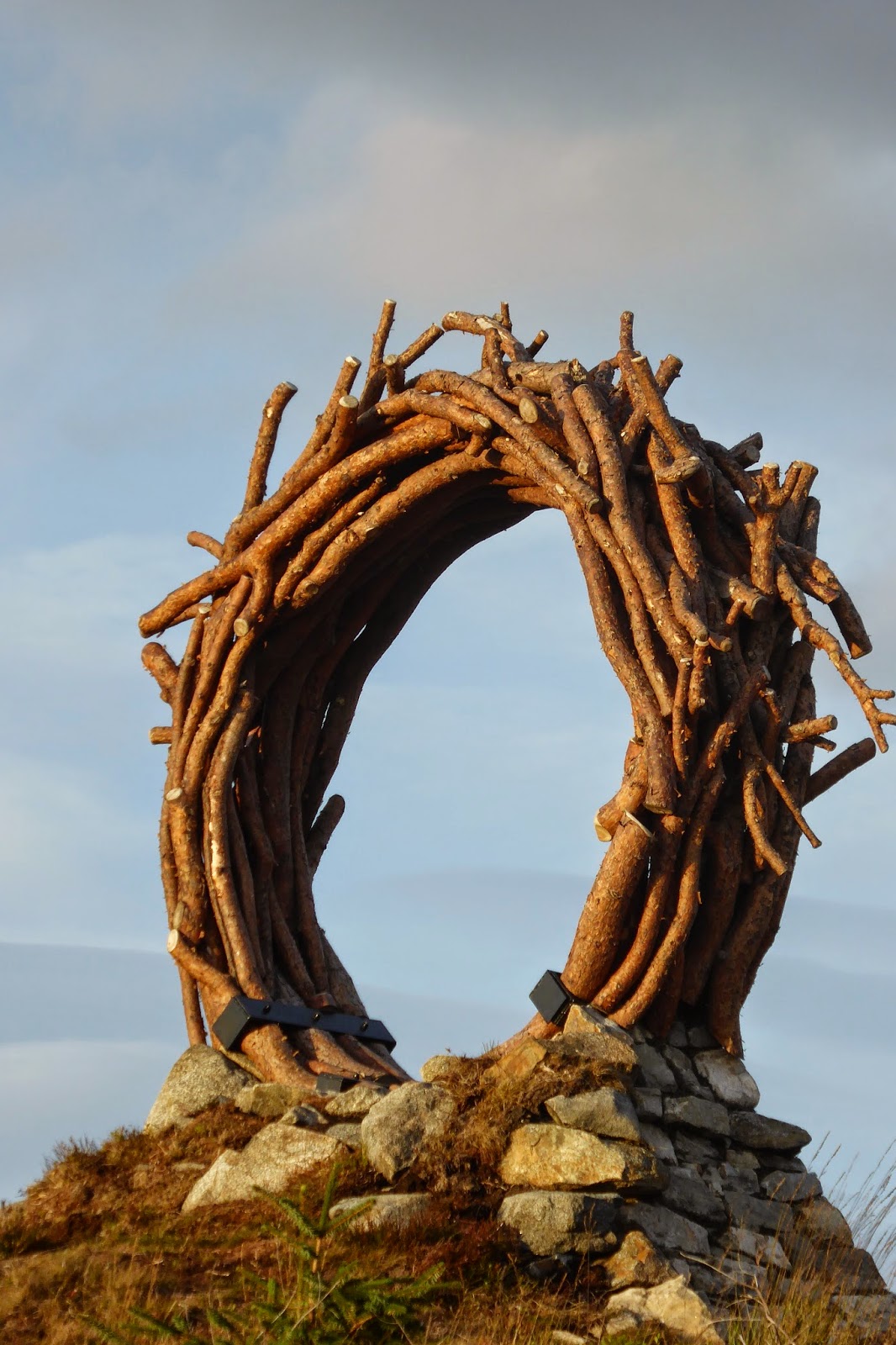 Just before the final descent into Invermoriston this "circle of sticks"  acts as a picture frame.  It frames a couple of Munro's (hills above a certain height).  The trouble is the sun was perched on top of them when I went past! ( see below). 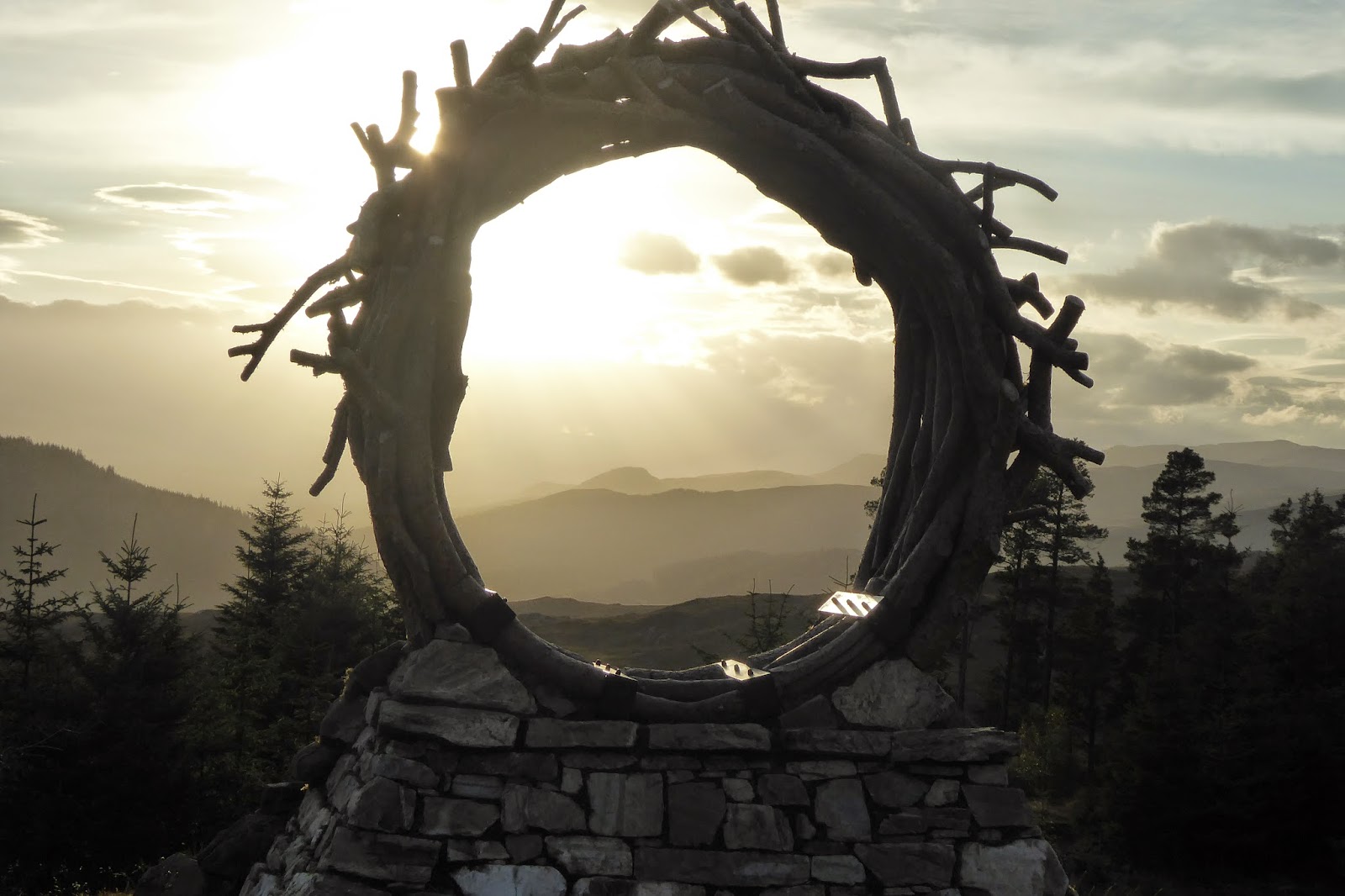 The promised bad weather came in overnight, and because of that I decided, or so I thought, that I wouldn't take the high route on the third leg from Invermoriston to Fort Augustus.  However, a couple of hours later, when I got to where the path divided, the weather had improved to such an extent that I decided to again take the high road.  The sun even came out, though the wind out in the open was quite ferocious.  The views of Loch Ness were stunning, making the effort well worth it. 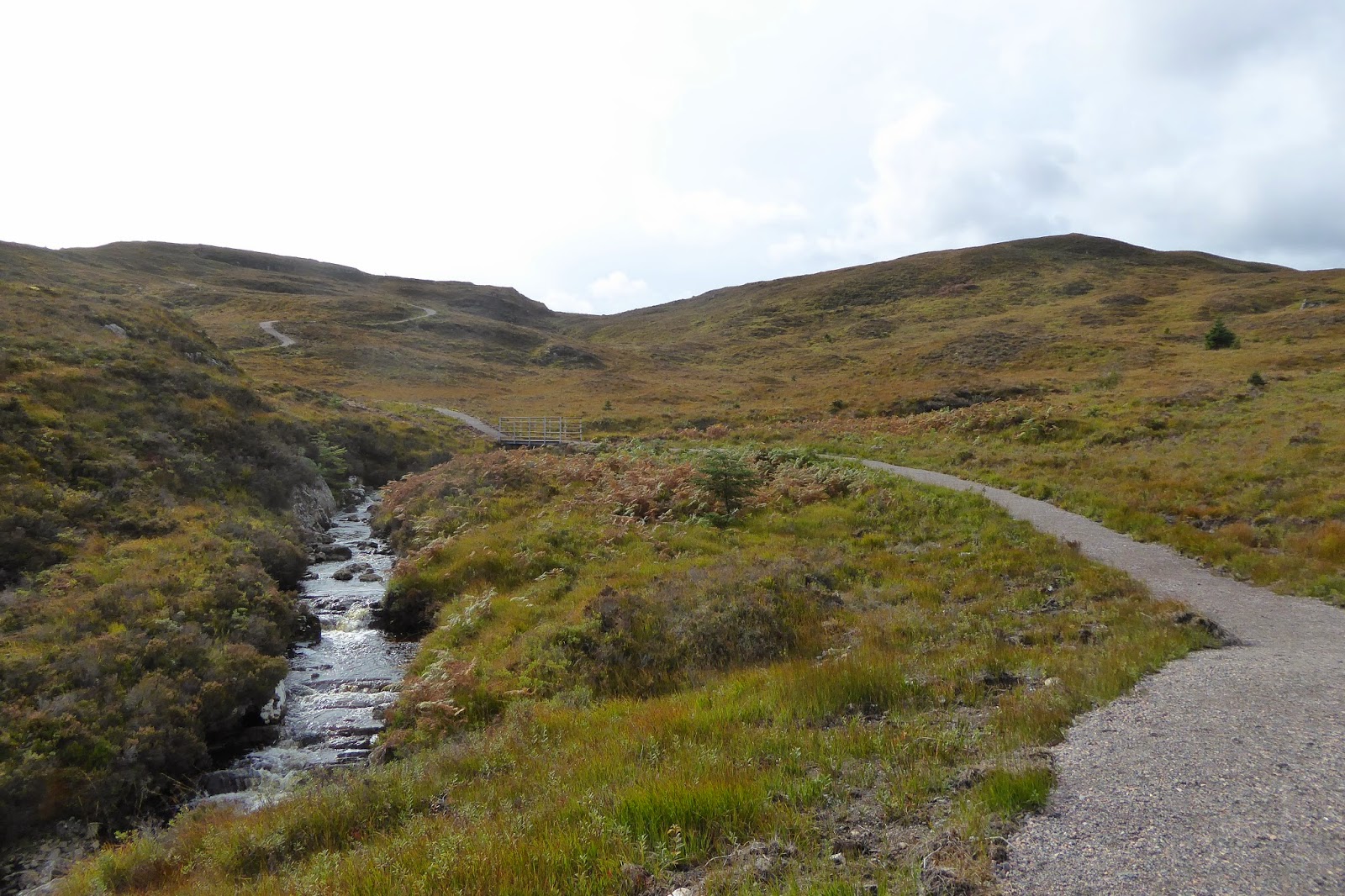 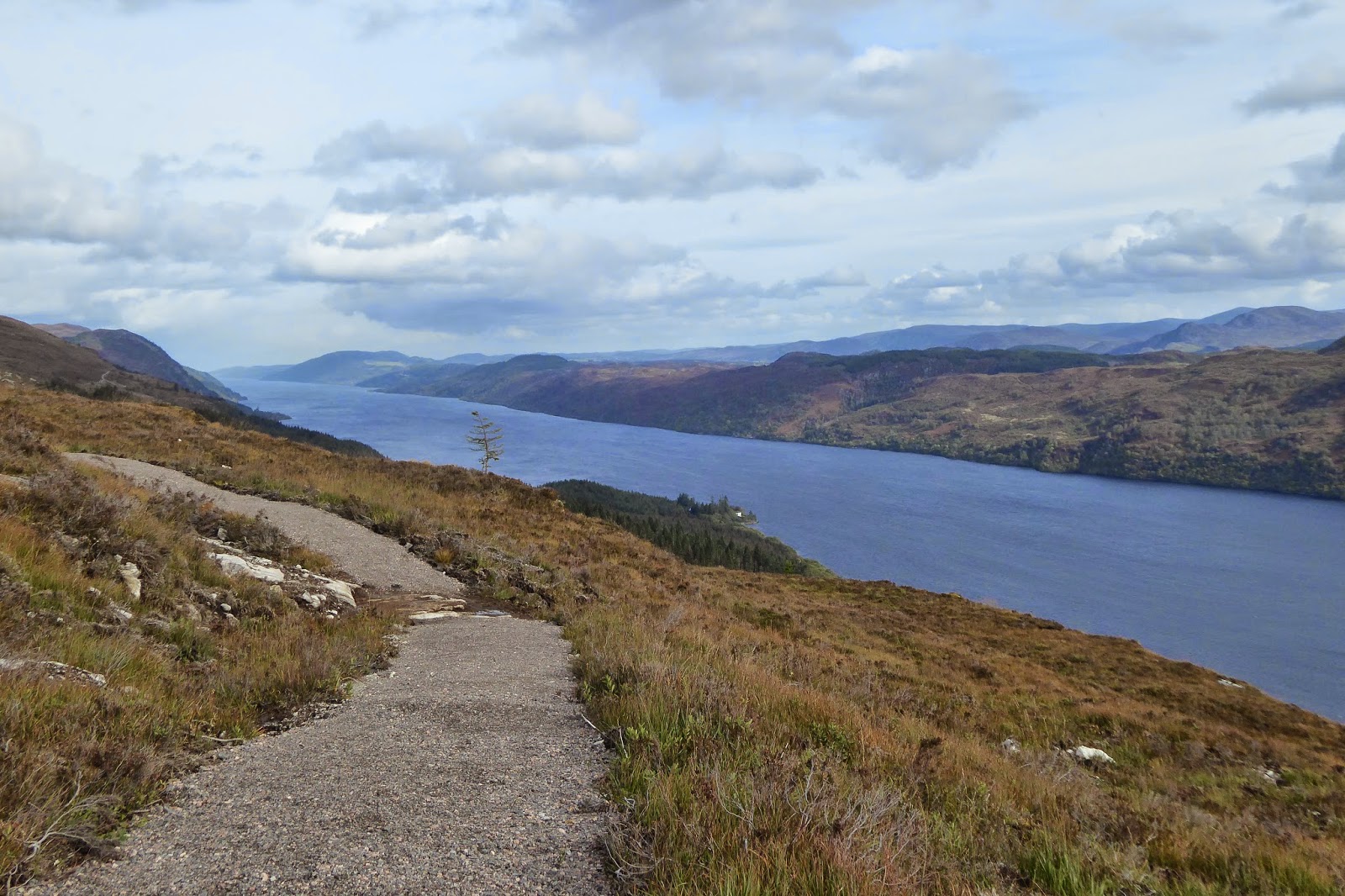 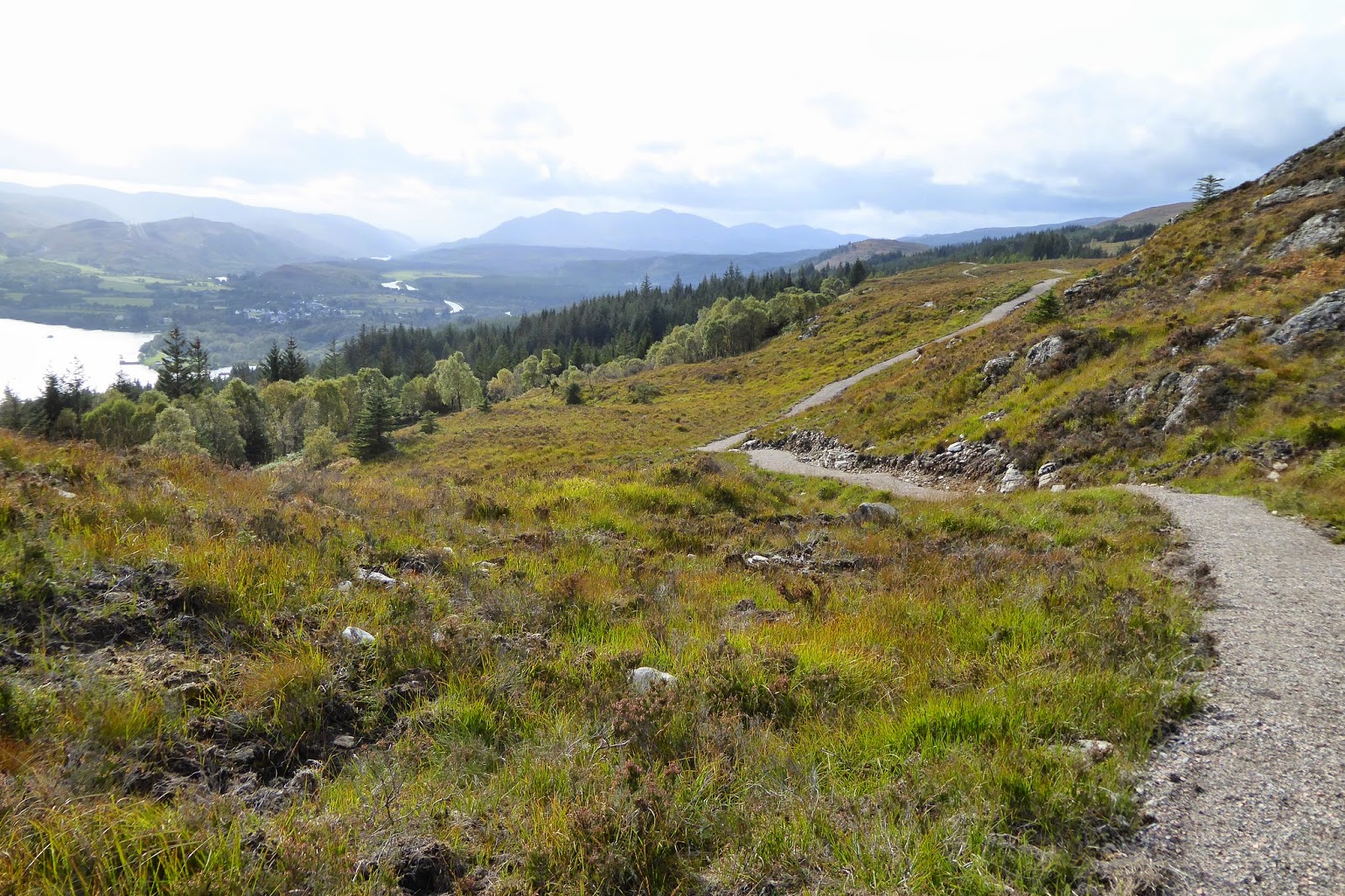 Looking towards Fort Augustus, and the far end of Loch Ness. 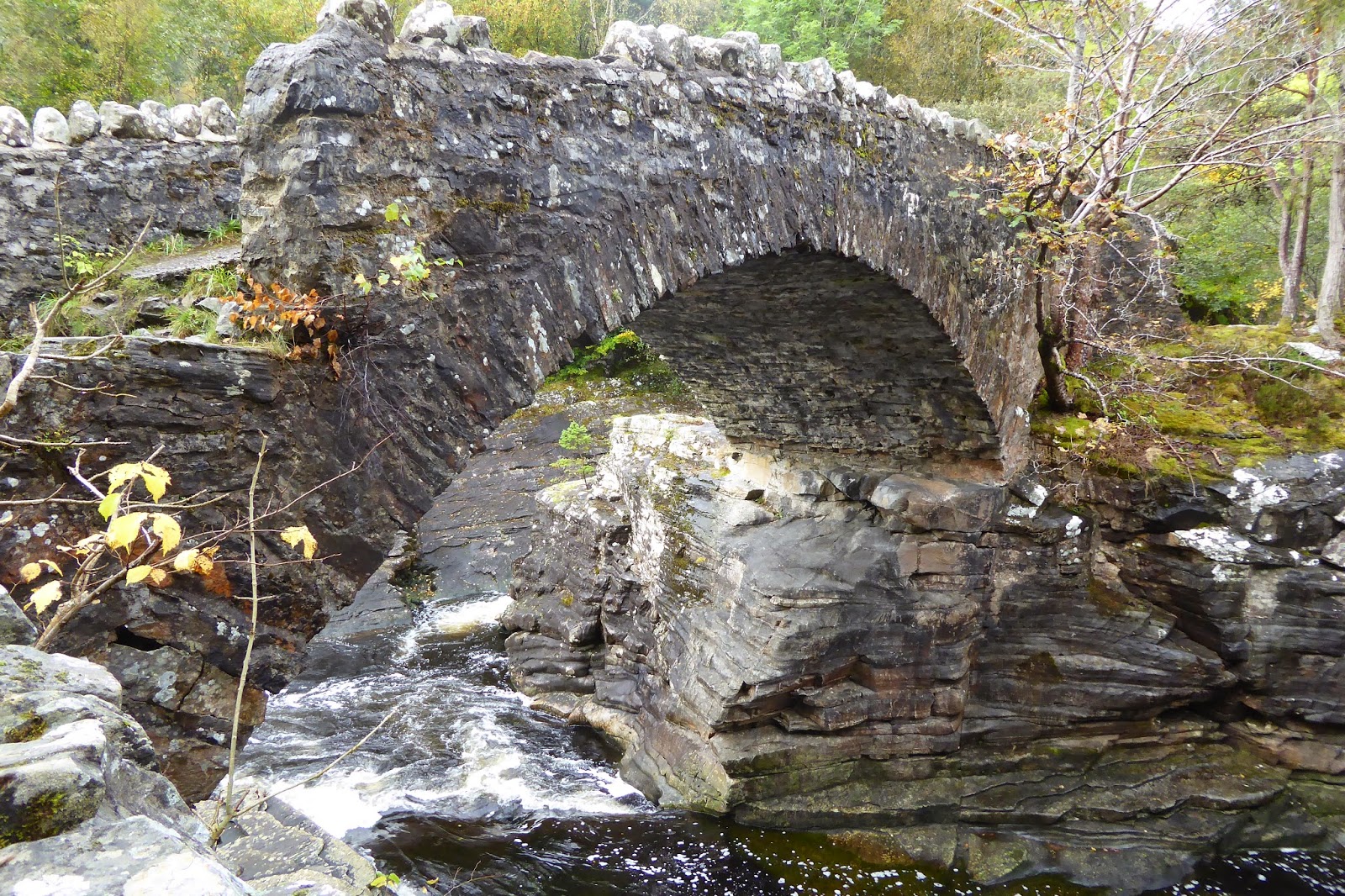 This old bridge in Fort Augustus was designed by Telford, the engineer whose name is linked to the Caledonian Canal.  Telford was intent on making communications in the highlands better 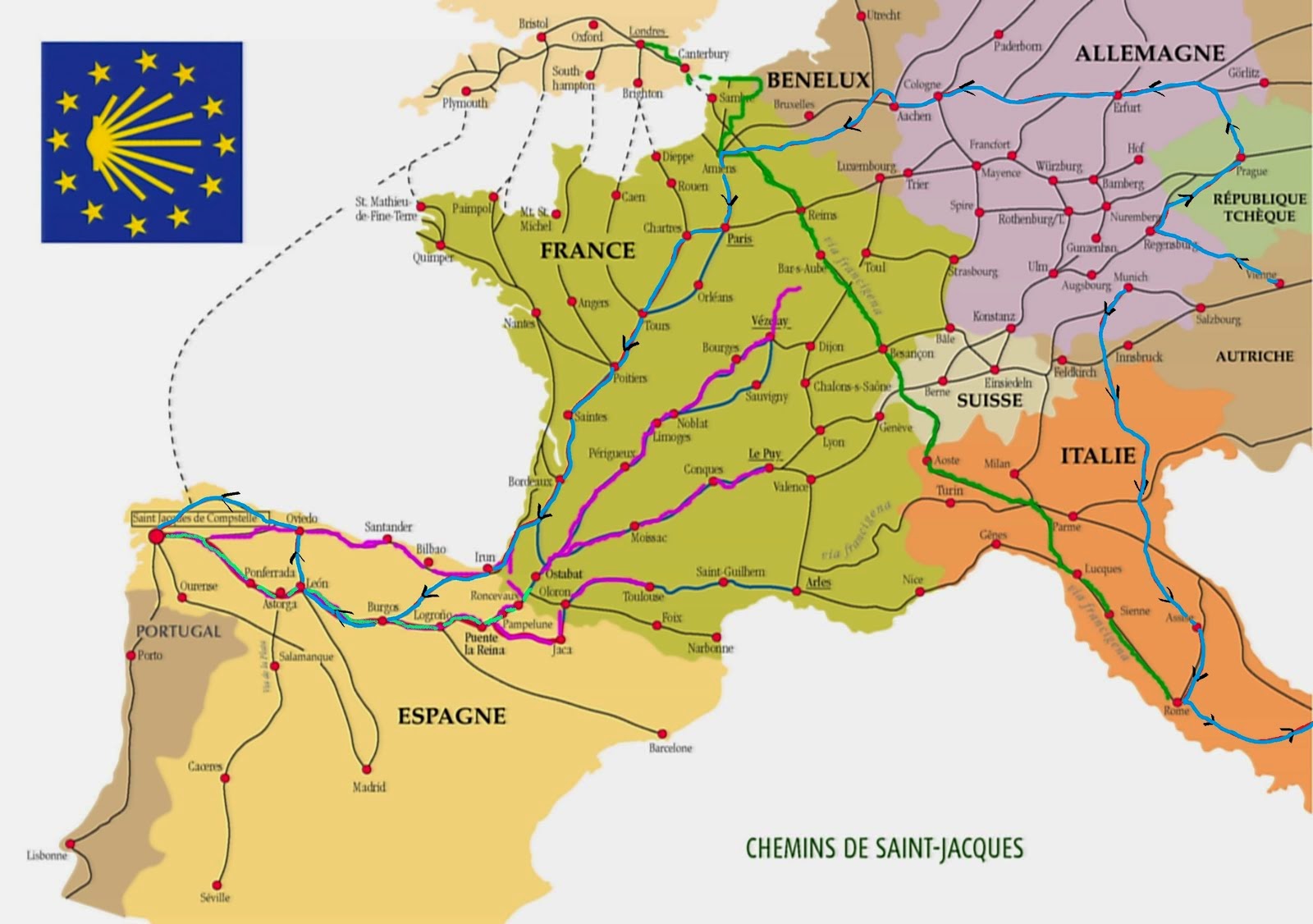